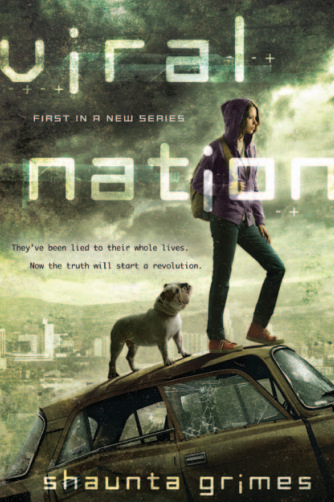 After a virus claimed nearly the entire global population, the world changed. The United States splintered into fifty walled cities where the surviving citizens clustered to start over. The Company, which ended the plague by bringing a life-saving vaccine back from the future, controls everything. They ration the scant food and supplies through a lottery system, mandate daily doses of virus suppressant, and even monitor future timelines to stop crimes before they can be committed.

Brilliant but autistic, sixteen-year-old Clover Donovan has always dreamed of studying at the Waverly-Stead Academy. Her brother and caretaker, West, has done everything in his power to make her dream a reality. But Clover’s refusal to part with her beloved service dog denies her entry into the school. Instead, she is drafted into the Time Mariners, a team of Company operatives who travel through time to gather news about the future.

When one of Clover’s missions reveals that West’s life is in danger, the Donovans are shattered. To change West’s fate, they’ll have to take on the mysterious Company. But as its secrets are revealed, they realize that the Company’s rule may not be as benevolent as it seems. In saving her brother, Clover will face a more powerful force than she ever imagined and will team up with a band of fellow misfits and outsiders to incite a revolution that will change their destinies forever. (From Goodreads.com)

In a world where one book in the overpopular dystopian category can seem like every other, Viral Nation stands apart.  Shaunta Grimes crafted a unique blend of an underestimated group of kids, science fiction, time travel, and a girl with autism to create a moving story you won’t soon forget.

*I received this e-book in exchange for an honest review via Netgalley.*

I have to admit upfront that I may be partially biased when it comes to this review.  Having a child with autism, I’m always finding myself drawn to stories with characters who have it as well.  It is hard though, to sometimes see the characters for what they truly are through my perspective lens. However, Clover reached into my heart and held tight.

I found myself reading as a mom when West, her brother, was narrating.  I saw the fear and fierce protectiveness he saw when looking at his sister.  I felt my heart ache when he refused to even let her walk the short street from him to there home, always watching and worrying. My heart understood.

So I was a bit surprised with Clover when she made me for the first time see life through the eyes of my child.  Sure, he is only 7 and isn’t living in a world ravaged by disease, death, and a new world order.  But, I truly could see him in Clover.  When she would need her dog Mango to give her deep pressure to help her calm down.  When she didn’t recognize she had been humming, flapping her hands, or rocking, I understood.  Yes, Clover let me see my son a little more clearly and what it is like not only to be him, but to be someone who is a person outside of his autism.  She didn’t let her disability hold her back and beyond that was a character outside of her diagnosis.  What could have been trite and stereotypical was in fact very well done and developed particularly well.

So, maybe I was biased going in to this book.  However, that didn’t take away from the things I loved about the story Shaunta Grimes told.  There were so many elements involved, I wasn’t ever able to get bored with another book about the end of the world.  It did get a bit distracting to have so many different things going on, and the time travel part was rather confusing.  I’m hoping that these things will be better explained and more polished as the series continues.  There are some issues I had with the mechanics of how the time travel actually worked, but I am (quietly) hoping to see those issues resolved.  (Although I won’t mention the specifics here since it is a major plot point.  Spoilers sweetie!)  I think I watch too much Doctor Who and read too many parallel/alternate universe books, so when a new theory on time and space relativity is introduced, I have to make it fit in with what I already know.

Overall, I think the book was enjoyable and very much look forward to seeing more from Clover, her brother West, and of course her loyal companion Mango!